Originally established in 1890, the Buffalo Brewing Company was started by Herman Grau based on the successful breweries of Buffalo, New York. An ambitious brewery from the beginning, Buffalo became among the largest beer operations west of the Mississippi, with distribution throughout California, Nevada, Hawaii, parts of Asia and Central America. Prohibition reduced Buffalo to producing ice and near beer, but it quickly resumed beer production after repeal. The brewery ceased operation in 1945 after national breweries locked up distribution channels and choked regional and local breweries into extinction. However, in the 1970’s, two enterprising law school graduates re-launched the Buffalo label in Sacramento. After a promising start and apparent success, the upstart operation folded only a few year later and the Buffalo has not roamed in Sacramento ever since. 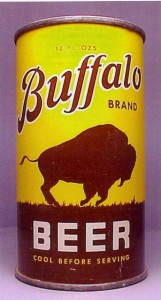 When Sacramento Valley’s early inhabitants found their way to John Sutter’s outpost, brewing was hardly a new concept. As in Europe, the American colonies boasted breweries aplenty and the fine art of home brewing was just another household ritual alongside washing the linens, cooking and tending the garden. Understandably, as dreams of gold and agrarian utopias lured the masses westward, beer naturally came along for the ride. So it was that Sacramento’s pioneer brewers came to ply their trade among the city’s burgeoning population and those en route to the mines.

The story of brewing in the West is complex and commands a much larger space than has been allotted here. Nonetheless, remember that brewing beer (and alcohol production in general) in Sacramento was as essential to local commerce as any other enterprise and much more than most.

Please park in the areas indicated in GREEN. There is a parking lot located at the corner of 16th and Broadway that is available for you to use as well. Use the crosswalk to cross Broadway and take an easy stroll to the brewery. Take note of the Regional Transit stops on the map as well. We appreciate your attention to this matter.

Street Parking Map
BACK TO TOP
Are you at least 21?

You must be at least 21 to enter this site.